The present church of St Mary in Abergavenny survives from a Benedictine Priory which was founded in the early 12th century as a cell to the abbey of St Vincent at Le Mans. It was spared destruction at the Reformation to become the parish church for its local community. It is home to a wealth of fascinating sculpture in wood and alabaster. Rightly famous are its numerous tomb sculptures and the well-preserved choir stalls, both of which will be the focus of the study day. The effigies begin chronologically with the important 14th century wooden image of John Hastings;
however, the fame of the Priory’s monuments are predominantly associated with the later alabasters of the Herbert family. The church also houses a fragment from what would have been a large Tree of Jesse.

The study day and photo gallery 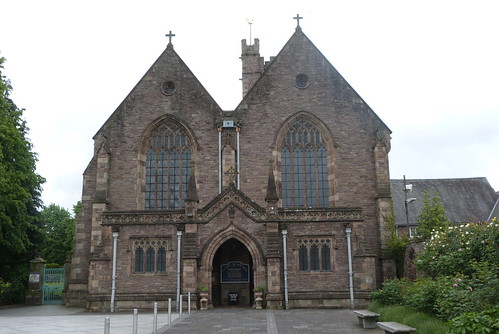 On our 2017 summer Study Day, Dr George Nash from University of Bristol led BAA delegates on an in-depth investigation of the Priory following his own excavations of the church and its surroundings as building archaeologist. Dr Charles Tracy spoke about the spectacular choir stalls, and Dr Kim Woods the extensive collection of medieval sculpture, including the exceptional wooden Jesse. Thanks to the kind assistance of BAA member David Lermon, we made a visit to the Gunter Mansion, a grade 2* listed town house recently acquired by the Welsh Georgian Trust. It has a particularly fine 17th-century plaster ceiling and a recusant chapel with wall paintings, all in need of much restoration.