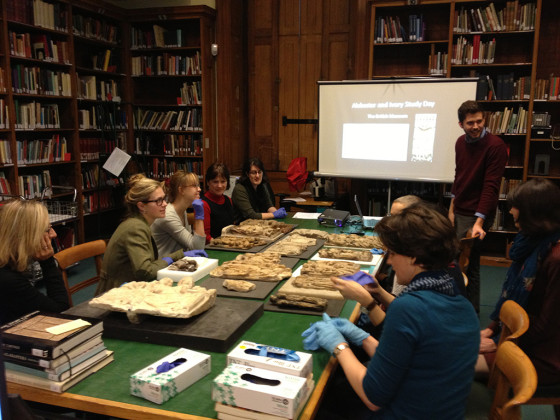 This study day focused on the British Museum’s collection of late medieval alabaster panels and ivories.  The last major publication on the ivories was in 1909 by O.M. Dalton, and the alabasters have yet to be published as a group. Collectively these intensely captivating and challenging objects are of international importance, and this session addressed long standing problems with certain individual pieces and groups.  The challenges facing modern scholars who seek to understand the making, consumption and later collecting of both types of object are similar and therefore exploring them together will encourage debate.The session was directly engaged with the objects and thus provided very special access to this important part of the British Museum collection. Case studies were presented alongside provenance information about the collections and aspects of production were discussed including the art of the forger, painting techniques and the role of science and conservation.
Places were limited to 15, of which 7 were reserved for students.

Being able to handle medieval objects from the British Museum’s collection was fantastic!  And the experts were captivating.